Writing can be a fairly mystical process.  I cannot always say for sure where the germ of a story comes from.  But as that germ begins to develop into a plot, and before it becomes populated with the actors who will carry the story, I will always know where the story is set.  In many ways, the setting determines the tone, the language, the plot, and the people.

When I write, I see my characters moving about within a physical sphere as clearly as I hear the words they speak.  The importance of setting was never more evident than it is in The Hanging.

The Hanging takes place a fictional town, Anacapa, at a fictional college—not at all the one where I teach—among the very real rugged mountains and rolling foothills of Coastal California.  Anacapa, as imagined, is near Maggie MacGowen’s fictional home in the Santa Monica Mountains—where my husband and I used to live—and the northern end of the Conejo Valley.  It is a beautiful area that always reminded us of Provence in southern France.

When I was a kid growing up in a different coastal valley from the one in the book, though it looked quite similar, I knew that the rolling hills were giants sleeping under blankets of sunburned scrub.  I could make out heads and shoulders, hips, and bent knees.  As shadows changed during the day, the giants seemed to stir in their beds.  Depending on the story running in my head or the age I was at the time, the giants could be fearsome, friendly, or sexy.  Or all three at once.  What I always knew was that they were powerful.

The first story I wrote that was set among the coastal range was titled, aptly, “The Naked Giant,” published in The Best of the Best, an anthology marking Signet Books’ 50th anniversary.   The contours of the hills, the stories about the giant, are an important part of the unfolding story of the narrator’s loss of innocence and trust, first as an adolescent and again at her fiftieth birthday.  Rainey, the protagonist, remembers a long-ago car trip with her father down the Pacific Coast.  She says:

The giant was no longer the grizzled ogre my dad always conjured  up.  He wasn’t ugly at all anymore.  And he certainly wasn’t fat-bellied.

My giant was tall and slender and beautiful.  His shoulder was broad, the tallest hill.  The hill tapered into a valley, forming a lithe waist, then a mound rose to form his narrow hip.  Rolls of land were the muscles of his long thighs.

I wanted to get the proportions just right, so I glanced down at my own skinny, sun-tanned thighs.

My eyes must have been dazzled, filled by the endless gold flying past.  Because when I glanced down, my leg appeared to me to be exactly the same downy texture.  When I looked out again at the giant’s thigh, I realized that he was lying there without any blanket at all.

“He is naked,” I whispered.

“Who is?”  Dad craned his neck, looking, I supposed, for a tramp.

“Never mind.”  I hunkered down in the seat and crossed my arms over the stiff peaks formed by the hated bra.  When I looked up again, the giant’s leg had segued into the next series of naked shoulder, waist, then hip and thighs, followed by another and another, naked giants stretching to the horizon.

Can you see the slumbering giants on the cover?  I think that Santa Barbara artist Robin Gowen beautifully captured the color, the light, and the contours of the region after a good rain—it rains quite a bit in the book—for the cover.

In the southern parts of California we have two seasons:  wet and dry.  One season doesn’t necessarily follow the other.   It’s dry, and then it rains, and then it’s dry again, and then it rains, etc.  The heaviest rain usually, but not always, happens during the winter months—winter for everyone else, that is; it’s generally warm and dry around here all year.

Ten days after a good rain, the scrub on the hills turns such a bright green you might as well be in Ireland.  If it doesn’t rain again for a month or so, the scrub fades back into its usual soft gold, the color of the underside of a ripe apricot, or the Crayola once labeled “flesh.”  Making the giants, I suppose, Caucasian.  But in our storybooks, weren’t they always?

Artists, from the earliest Native Americans to the present, have been drawn to the landscape.  The work of California plein air painters who set up their easels among the hills to capture the scene plays an important part in the plot of The Hanging.  Specifically, paintings by the late Millard Sheets, who grew up only a few miles from my own childhood home, are folded into Maggie’s discovery that something nefarious is going on. 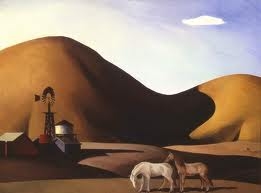 The first time I saw a Millard Sheets painting was at the LA County Fair, held in Pomona every fall.  I was maybe twelve, the age of Rainey in the short story above.  I could not take my eyes from the painting.  Sheets had depicted the hills not only as I saw them, but as I felt when I was out among them.  Perfectly, he had painted the giant under his blanket, resting, protective.  And beautiful.

This is the third in the Maggie MacGowen series that has Maggie living in the canyon house she shared with Mike Flint.  The next book takes her to Berkeley.  And after that?  I’ll let you know when I know. 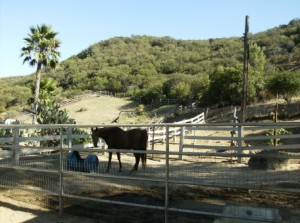